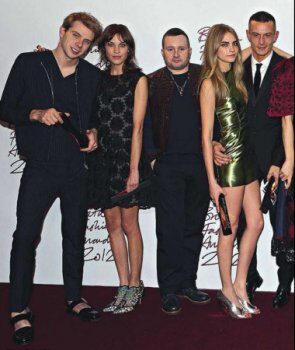 London Fashion was once the greatest exporter of fashion talent. From its ramshackle colleges and shoebox studios, from its East End clubs and pubs, the city issued designers of rare imagination who — after a brief stint showing at London Fashion Week — would skip off to Paris, Milan or New York, perhaps to take up the top job at a venerated French house, or to show under their own label to international audiences.

(Even as recently as eight years ago, editors and buyers would skip London on the twice- yearly fashion week circuit.) Of course, London had regular eruptions of brilliance: John Galliano, Alexander McQueen, Hussein Chalayan, Stella McCartney — but the growing subtext was clear: talent came from London, but a fashion business was born abroad.But no longer. With a new, rigorous infrastructure, progressive funding for emerging talent, innovative education, and a real, tangible sense of excitement, British fashion is having a big moment. Just think of the labels based in London, the old new guard of Christopher Kane, Jonathan Saunders, Erdem, Roksanda llincic, Richard Nicoll, Peter Pilotto, Meadham Kirchhoff, Charlotte Olympia, House of Holland, and the new new guard of Mary Katrantzou, J.W. Anderson, Simone Rocha, Thomas Tait, Sister by Sibling and Eudon Choi.

All are united by their international currency as well as a specifically London sense of community. Not only is there a remarkable talent pool in London, but the pool is also staying put, a result of the fact that it’s now viable to create a real business there, something unimaginable a few years ago.